Client Success Story: Food is the vessel for deeper work 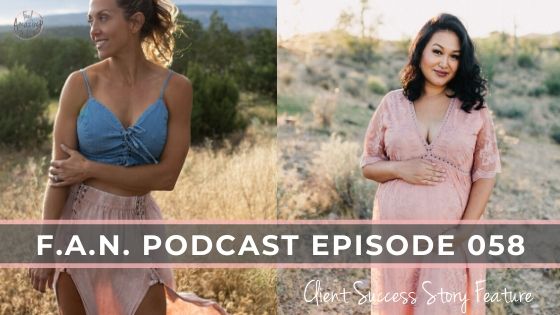 Ready to “reboot” and trade in your new year resolutions for a strategy that works?  Join the Feel Amazing Naked Reboot here NOW.

Do you think that losing weight will change your life?

Have you believed that if you could just lose 20 lbs or eat more salad, your life would be all the things you want it to be?

I used to think that. And then I lost the weight and I still wasn’t happy or fulfilled.

What I discovered on my own journey of weight loss and better health is that, typically, the food isn’t the issue.

There are other underlying issues that cause us to reach for the food and that brings all those negative feelings into our lives.

And if we can get control over some small habits and commit to making small changes, we can finally see the results that we originally thought losing weight would bring about in our lives.

In today’s episode, I am talking to my client, Joanne, about her struggles with food and the changes she needed to make in her life.

Before we get into the meat of today’s episode, let’s talk about what’s coming up in my Facebook group in the new year.

All the health coaches are screaming about resolutions. They’re shouting to have their voices heard above the din about how you need to set BIG goals if you expect to see results.

And I’m over here whispering, “no.”

That’s why I’m starting The Feel Amazing Naked Reboot in January.  You can join HERE now.

I want to help you break the cycle of all-or-nothing and show you how you can be successful 12 months a year, 365 days a year, and never set another New Year’s resolution only to break it before the end of January.

Now, onto the show…

When Life Careens Out of Control

Before Joanne and I actually started working together, we had chatted but felt like she wasn’t quite ready to hire a coach.

She wanted to lose weight, so she began running and actually dropped a good amount of weight. She was preparing to run a 50K, (yes you heard right, a 50K) when she found out she was pregnant with baby number 5.

And that was most definitely not in Joanne’s plan.

She had established some great routines for health and wellness, and on top of that, she felt awesome. But pregnancy brought it all to a screeching halt. And Joanne felt like her life was suddenly out of her control.

While scrolling through old emails, Joanne saw where we had chatted a few months earlier and she knew that it was time. She wasn’t managing her life or her home the way she had been and she needed help moving forward.

The thing that drew Joanne in was the fact that I don’t focus specifically on food or weight loss, but rather on our lives as a whole. 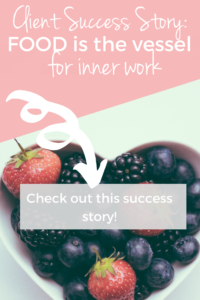 Dealing with Out of Control Emotions

Joanne had gained a bit more weight with each of her 4 previous pregnancies, to the point where she gained 50 lbs with baby number 4.

But she had buckled down and lost all that weight. She was back to the weight she had been before any babies came along and she was thoroughly enjoying wearing some of her favorite outfits again.

And then she found out she was pregnant. And the thought that all her hard work was about to fly out the window was too much for her emotionally.

Joanne needed help to manage her emotions and to figure out how to move through the pregnancy without losing everything she had worked for.

When I met Joanne, I immediately knew that food was not the issue she needed help with. No, her limiting beliefs around pregnancy and her life as a whole were what needed to be addressed.

Joanne had some difficult pregnancies, including excessive weight gain. And now, she believed that all pregnancies would be this way for her.

My job coming alongside her was to support her through pregnancy and help her overcome those limiting beliefs to see that she could totally rock pregnancy and come out the other side as healthy as she was when she first found out she was pregnant.

One of the biggest things that Joanne overcame during the pregnancy was her self-talk.

If she was feeling sick, instead of talking about how sick she felt, she tried to determine what was making her feel sick and what she could do to overcome it. She refused to just accept the sickness as inevitable during pregnancy, and instead, find ways to feel better.

Joanne also spent a lot of time worrying about the future, even the near future. Her morning thoughts would be consumed with wondering what the afternoon would be like and how she would handle it.

I took time when I first began working with Joanne to help her understand how the brain works when it comes to making changes.

Our brain will always work to protect us and to conserve energy. If we try to make changes, our brain will resist because doing the same things we’ve always done uses less energy than making changes.

Joanne knew that she needed to get her emotions under control but she just didn’t know how or where to start. It was all part of the journey she had to go on toward having a better life.

Now that her baby is a few weeks old, Joanne is dealing with not a whole lot of sleep, but instead of waking up and saying, “I didn’t get any sleep last night. I’m going to be so tired today,” she now looks at the advantages of being at home with her little girl and the opportunity to spend her days caring for her and she is able to put a positive spin on those emotions that used to control her.

Her entire mindset has changed.

The Food Is a By-Product

One of the biggest things that Joanne learned as we worked together was that food is not her primary issue. Emotional eating is.

She would get upset about something or feel stressed and she would start eating.

And she would tell herself a story about how if she had somebody who could come cook delicious healthy food for her every day, she would have the awesome body she wanted.

What she discovered is that as she dealt with her emotions and thought patterns, the food became a non-issue.

She had to dig deep into how she reacted to stress in order to see why she ate the way she did, and when she got those reactions under control, she could see very clearly that her struggles weren’t with food.

We all have relationships and other things to deal with. Maybe you don’t turn to food to deal with your out of control emotions. Some people turn to alcohol, some to over-exercising, some to food.

Joanne realized that she let others control her thoughts, behaviors, and emotions.

She had to come to a place where she was okay with being selfish if it meant paying attention to her needs. Joanne was brought up to be a people pleaser and it had followed her into adulthood.

She had to break the habit of always thinking of others first and begin to focus on her own life, her own needs.

She is becoming more comfortable with setting boundaries, saying no, and making decisions based on whether it’s a good fit for her, in spite of what others may want from her.

Learning to Be Present

As a project manager, Joanne has spent her career thinking about the future and planning for it.

When she began to internalize the concept of being present, she saw a major shift in her life.

It turns out that Joanne’s journey wasn’t about food at all. It was about learning to enjoy the everyday moments and learning to connect with herself and her family.

It was giving up the worry and anxiety that kept her emotions out of control so much of the time.

When we began working together, Joanne identified herself as a mother, a wife, a runner.

She was always looking toward what was coming next. Remember that 50K she was preparing for when she found out she was pregnant?

Instead of saying she’s a mom, she can now express what it means to be the mother of her unique children and her role in supporting them.

Her personal growth has helped her to define and narrow her identity.

If You Need Help

When I asked Joanne what she would say to another woman who is hesitant to reach out for help, the first word that came to her was trust.

She was scared when she came to me. She didn’t know what to expect and for the first time, she couldn’t plan everything out.

But she had hit the bottom and her only plan was to trust me. She had to trust that I could help her and that we could navigate this path together.

“I can’t even put words around it, to how in the world my life is changing in so many good ways. Between family relationships, new friends, and reuniting old relationships, everything has been really great.

“I know it sounds really cheesy but I can’t find a thing to complain about. My life is just so much for the better now.”

Share using the buttons above and don’t forget to tag me (@awalkmyway and @feelamazingnaked) when you do!