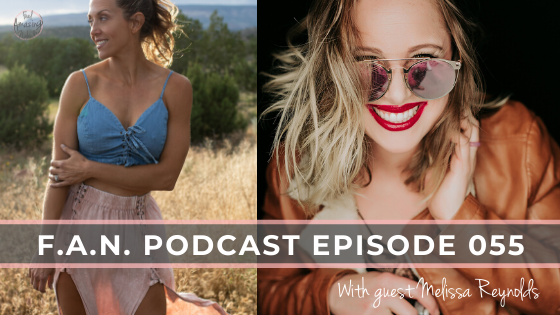 Women choose every day to start on a journey to better health, but can you imagine beginning that journey at a time when you know for a fact you are about to gain weight?

Beginning a health journey when you are almost 3 months pregnant isn’t a common scenario.

However, today’s guest on the podcast refused to feel less than amazing at one of the most special times in her life.

In this episode, one of my amazing clients joins me to share her journey toward more confidence, better food choices, and weight loss during pregnancy. She is a powerful example of what happens when you are forced to look outside the “scale” and look inward to feel progress.

As this episode airs, we are officially in the holiday season and with that comes all sorts of food and body image-related issues. If you need extra support during the holidays, be sure to join my Facebook group where I share tips to help you make wise choices no matter the season.

I will also be doing an anti-resolution challenge in January, so stay tuned for that!

Why Melissa Hired a Health Coach While Pregnant

Melissa was in the first trimester of pregnancy with her 5th child when she contacted me for some help.

Melissa had an extremely difficult pregnancy before this one and she was very afraid to go through that again. However, she had tried many programs and had never found anything that was sustainable for her.

She needed someone who could help her figure out how to improve her energy levels. Melissa has a business to run, 4 other kids to take care of, and let’s not forget – she was growing another human at the time. 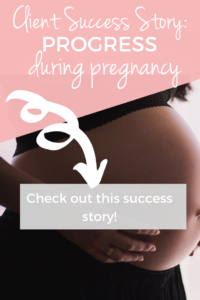 Shifting the Focus Off of Weight Loss

The thing that made Melissa’s journey so unique is that she wasn’t working for weight loss.

Instead, there was a 100% chance that she was going to gain weight during the months we were working together.

This meant that she had to shift her focus to something other than weight loss for health.

This aspect of her journey excited me because it is too easy for women to focus solely on weight loss and not want to do any of the inward work that truly changes lives. Melissa was going to be forced to do those things that actually make a lasting difference.

There were several areas that we focused on with Melissa to get better control of her health but the most important one involved her kids.

With 4 very young children, Melissa found that after getting food prepared, served, and finally managing to sit down at the table herself, there was always some kind of accident or other need that forced her back up.

Mealtimes were passing without her actually eating anything.

The kids also weren’t eating the food she was preparing due to the chaos that was present at the table. Melissa was serving snacks multiple times per day; “throwing snacks at the kids just to get them to stop asking.”

This wasn’t teaching the kids any great lessons about eating either.

Because of her seriously depleted energy levels, Melissa simply didn’t have the energy to fight the battles with the kids and teach them to eat at mealtime rather than grazing all day.

Learning to Feed Yourself

Because of the issues with her kids not eating well, Melissa was also not eating well. As she began to focus on teaching the kids to sit down and eat a real meal, she was learning the same lessons.

The focus began to shift away from the kids and to herself.

Melissa’s habit was to drink bulletproof coffee in the morning and then pretty much not eat for the rest of the day. She was busy chasing the kids all day and her hunger signals weren’t kicking in because she wasn’t eating in the morning.

But once the kids went to bed, out came the chips and the candy bars while she watched television from the couch. That interrupted her sleep because her stomach wasn’t happy with all the junk she had put in it.

No sleep meant no energy for the next day, which meant once again throwing snacks out for the kids, not eating all day, and back to the couch for more Doritos and Snickers the next night.

It became a vicious cycle that Melissa couldn’t seem to break.

The interesting thing about all this time was that Melissa considered herself truly healthy. She maintained a Crossfit membership throughout her pregnancies and she went!

She either ate healthy during the day or she didn’t eat at all. She made homemade food when she did cook.

She did have some food elitist issues though. She thought all carbs were bad and she beat herself up anytime she served them.

I see this in my clients all the time; that if we don’t eat a certain way, we aren’t good enough.

I am adamant about not falling into an all-or-nothing mentality. When you can say that there is no such thing as bad food, it makes eating for better health much more sustainable in the long run. 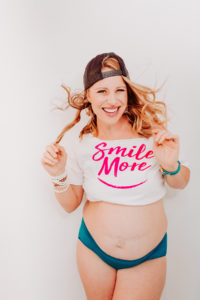 Obviously, since Melissa was pregnant when we started, we knew that she was going to gain weight during our time together. However, that didn’t mean she wouldn’t still see some results physically from our sessions.

She was at 178 lbs when we began working together and she says that when she is at her best, she is right around 140. She started this pregnancy just a few pounds shy of what she weighed when her twins were born.

The first thing we focused on was making sure Melissa ate on a consistent basis, as this was her biggest hurdle. We concentrated on a balanced plate, and eating regular meals.

And in that first trimester, she got down into the 160s. By eating more food and more often.

The biggest change she noticed was that her non-existent energy was coming back. She felt great and not like she was missing anything.

Throughout the entire pregnancy, she never got over 180. Her joints felt better, and being on her feet for 10 hours shooting photos wasn’t torture on her anymore.

How to Deal with Overwhelm

At one point, we had to tackle Melissa’s feelings of overwhelm.

Being the mom of 4 little people with another one on the way can really throw you for a loop most days. It was one of my priorities to help her find ways to deal with the overwhelm.

One of the problems was that because she wasn’t making real meals, her kitchen wasn’t getting messed up and then cleaned up. It was just in a constant state of disaster. Changing her habits from grazing all day to actual mealtimes allowed her to keep the mess more under control.

Melissa found that, for her, prepping dinner during the kids’ naptime was key to feeling more in control and less overwhelmed. After all, they call dinnertime the “witching hour” for a reason.

Battling the mess also meant teaching her kids to clean up after themselves. Nobody feels like doing dishes right after a meal but if we let it sit, it tends to multiply and we hate ourselves for leaving it the next morning. And that leads to even more overwhelm.

Okay ladies, the title of this podcast is Feel Amazing Naked, and I don’t know very many women who actually feel amazing naked when they’re pregnant. Am I right?

But one of the things I absolutely love is that, as a boudoir photographer, Melissa was always encouraging women to get in front of the camera even if they felt uncomfortable…and during her second trimester, she followed her own advice.

She wants women to feel confident and sexy no matter what their bodies look like, but at 20 weeks pregnant, she was struggling to feel that way herself. She had already been through 3 pregnancies, including a pregnancy with twins.

Now let’s be honest – some women look amazing when they’re pregnant. You’ve seen them; the woman who’s newly pregnant and she looks as good as she did before she even found out. Or the ones with the perfectly shaped belly who wear maternity clothes like a model.

But Melissa didn’t feel like she was either of those. Her pregnant belly wasn’t “cute” and the thought of baring her scars and stretch marks for a photoshoot sent fear through her.

She has a deep belief though, that every woman needs to celebrate her body, whether that body looks the way she wants it to or not. Her photo session had her in tears, as she realized just how hard she was on herself…how much joy she was stealing from herself.

Choosing to Care for Yourself

For Melissa, all the work we’ve done over the past few months has come down to one major lesson: when you have all the knowledge of how to take care of yourself, when you know exactly what to do…you have to make a choice.

It would be easy to continue choosing the way you know. But you can choose to change your habits, to make daily choices that lead you in another direction.

Your journey is not going to be perfect. You will fail along the way. Maybe other people won’t support you in your new lifestyle.

Melissa eventually realized that she had to stop living for everyone else and pleasing them because if she continued down the path she was on, she wasn’t going to be able to enjoy her life. She had to take care of herself in order to take care of the people she loves the most.

There Is No End to Self-Care

One of the things I find interesting about Melissa is that she felt saddened to realize that there would be no end to her journey.

She compares life to a video game. You know how when you beat the final bad guy and then you find out that there’s a bonus round? Life is kinda like that except the bonus rounds never stop coming.

You never get to stop taking care of yourself. And instead of being uncomfortable in that, she began to take comfort in it.

She knew that going forward, she would feel more alive, she would have the energy she needs to be the mom and wife she wants to be, and she is doing everything she can to stay alive and be healthy, inside and out.

If You’re on the Fence

When I asked Melissa what she would say to any other woman who is on the fence about getting help, she said, “I would tell her to stop getting in her own way.”

Stop making excuses for why you won’t start. For Melissa, it was always about money. She would convince herself that she couldn’t afford to get help. Even her husband told her that it was silly to sign up while pregnant.

But she knew that if she didn’t reach out, her family was going to fall apart.

She started the process to “show him what she could do.” And what happened was that she showed herself.

Are you ready to reach out? Do you need help overcoming limiting beliefs about your body or what you can do to increase your health and energy regardless of the stage of life you’re in?