How are you collecting evidence in your life?

Something that often comes up in coaching conversations is how we see our progress and how we collect evidence about our progress.

In today’s episode, I want to help you become aware of evidence collection in your life.

Have you ever had a friend do something that irritated you…

Then you begin to every time you are around her, collect more evidence in your mind about why she isn’t a great friend, why she triggers you, etc.

Or maybe someone you see on social media—then you criticize everything she posts. Everything she shares, you judge.

How about your husband? You might be spending your entire marriage collecting evidence as to why he is failing.

It is a choice…

It begins with a thought you choose to think (he never does it right, he isn’t doing enough) and that anger/resentment/frustration leads to more evidence collection.

This is an example of evidence collection. You are doing the same thing in your own life about YOURSELF. 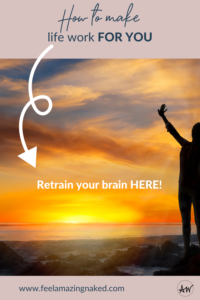 One of my clients got on for a coaching call and she told me the following:

“This is too easy”

“I am not doing enough”

When I shared this concept, I tasked her with shifting her evidence collection and we found:

Collecting evidence against yourself is one of the BIGGEST forms of self-sabotage.

You tell yourself it isn’t working/going the way you want/not meeting your expectations and so you collect evidence to prove yourself correct.

The problem though is that the evidence isn’t validated and it isn’t fact. It’s often just stories we are telling ourselves because we’ve created the muscle memory of collecting evidence against ourselves.

What if you did it differently?

What if you hunted for evidence to validate your own effort? Collected factual evidence?  Evidence that supported your journey?

What if you refused to be in effect? And each time you saw your brain go there you asked: What do I want instead?

I find that evidence collection happens because our expectation of how the journey should look isn’t what it really ends up looking like. We tell ourselves it isn’t working and then we collect evidence to prove it isn’t.  Then we go try something new and do the same.

The common denominator is you.